Blackbird Blackbird just finished up an awesome remix of Beach House’s wintry single ‘I Do Not Care for the Winter Sun.’ It’s a beautiful song to start off with, but Mikey really took the tune in a completely different direction, tossing some summery fervor in with the winter melancholy.

Beach House - I Do Not Care for the Winter Sun

Other happenings in the BB world: He’s releasing his album Summer Heart physically on March second on Art Union/Plancha. Also, Teenage Reverb has released his second remix of ‘Hawaii,’ and this one will feature on the upcoming remix album. 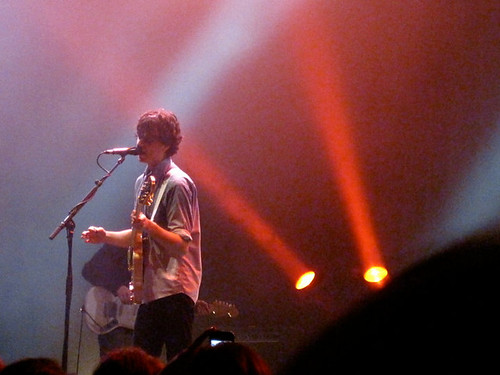 Last night Vampire Weekend, Beach House and Dum Dum Girls played at the Bank of America Pavilion in Boston. Vampire Weekend, as you would expect, played in front of a sold-out crowd. The night kicked off with Los Angeles girl band Dum Dum Girls. The quartet, completely decked out in lace, was a bit disappointing; an energetic ‘Jail La La’ was the only song that raised the heads of the people people that were slowly trickling to their seats. Dum Dum Girls didn’t seem to be opening for Vampire Weekend, rather the next band to take to the bright lights.After a short break, and a quick gander at a youthful trio, Art Decade, sharing a single mic by the bar, I returned to see Beach House hit the stage.
The Baltimoreans, along with a backing musicians on the drums, guitar and synth, instantly put the crowd, which was rather plump by then, into a deep and glorious daze with a five-minute ‘Walk In The Park’. The chilled out mood drew on until they hit ‘Norway’. The intense strobe lights and overall energy was something that I didn’t expect from the usually glazed over Beach House. This reinvigorated beat carried on throughout the rest of the set. Victoria Legrand’s vocals and hair bounced around the white tent and Alex Scally’s stunning guitar and reverberated throughout. Beach House’s set finished off with a splendid rendition of ‘10 Mile Stereo’, and as with almost every song they played last night it was better than the album version. The Beach House set was truly spectacular, the vivid lights and heavy drums added something that I didn’t find on Teen Dream. Twenty minutes after Beach House sauntered off, the New York boys strolled onto the stage to a fresh dose of hip-hop beats before picking up their instruments and hopping into ‘Holiday’. The headliners moved onto flashy hits like A-Punk and Cape Cod Kwassa Kwassa. Then Ezra Koenig autotuned his mic, played around by hitting ridiculous notes before diving into a beat-bopping ‘California English,’ which I really enjoyed although I don’t appreciate it at all on Contra. They then slowed things down a bit, dropped a glowing coastline behind them and slipped into an intimate ‘I Think Ur a Contra.’ Not wanting to dwell on such a relaxed atmosphere, they quickly transitioned into ‘Cousins.’ They moved on, covering Bruce Springsteen’s ‘I’m Going Down,’ ‘Giving Up The Gun,’ and ‘Oxford Comma,’ before finish their main-set with ‘Mansard Roof.’ Monday. We find ourselves at the start of the new week; here’s a few songs to toss you right into the week ahead—it’s a mixture of old and new but should do the trick. To start things off we’ve got another Delorean track off Subiza, ‘Warmer Places,’ a song from my favourite Berlin-based group The Whitest Boy Alive, a few Phoenix and Vampire Weekend remixes, five-plus minutes of relaxation courtesy of Beach House, Mos Def’s Desmond Dekker tribute and a track off Swedish band The Radio Dept.’s new album Clinging to a Scheme. Have any suggestions for next week’s mix? Send them our way!

Beach House - ‘Walk In The Park’ Beach House - Used To Be